“Do you think that this will cause, Sarah, a mass exodus of some Twitter users from the platform?” Brianna Keilar asked.

“I can’t say how users are going to react, especially because you know about half of them voted to reinstate him,” the reporter noted. “But I do know that advertisers are going to be very skittish about this decision.”

“Brianna, I spoke with one of the biggest advertising agencies last week, and one of the things that they were saying is that they’re issuing guidance to advertisers right now, but that many of their clients are skeptical about remaining on the platform if Donald Trump is reinstated, they don’t want to have anything to do with January 6th or questions about democracy or the validity of the elections in 2020,” she added. “And so I think that the reinstatement of Trump can just exacerbate some of the, uh, Exodus we’ve seen from advertisers to date.”

However, one of the first tweets to get traction after @realdonaldtrump was reactivated was one where he explicitly condemned any violence on January 6…. 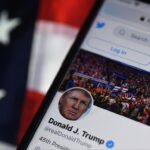