Tiffany Trump, 29, was just married at Trump’s Mar-a-Lago estate in what was largely a beautiful wedding full of beautiful people.

The only problem was that Donald Trump Jr.’s fiancee, Kimberly Guilfoyle, wore a dress that was in not great taste (it was black and had a weird wing-type thing on it), so Ivanka Trump cut her out of an Instagram picture.

That was widely discussed after the wedding, including on “The View,” where Sarah Haines asked, “Is there some scandal here or –?”

Responding, former Trump White House Communications Director Alyssa Farah Griffin said that there was no scandal and that, rather, it was just that Guilfoyle just wasn’t dressed appropriately for the Florida wedding. In her words:

“Well, I stand with Ivanka on this. Kimberly didn’t understand the assignment. It’s a Florida wedding in November.

“All the women clearly knew what the palette was, what the look was, and she was dressed like she was going to, like, a MAGA funeral or something. I’m going to be honest. I probably would have cropped her too.”

Sunny Hostin, joining the pile-on, “The View” co-host Sunny Hostin said: “She did have a weird wing, like, a bat wing on her dress.”

Up to that point, all was fair and in mostly good fun. Guilfoyle’s dress was weird and not at all appropriate for the wedding, as the New York Post noted, saying:

”It was a picture perfect wedding photo. Beneath the Palm Beach sun, Tiffany Trump stood in the middle of the frame, a blushing bride in a white, beaded Elie Saab gown. She was flanked by mother Marla Maples, in a ladylike lavender frock, also by Saab, and her father’s wife, Melania Trump, a vision in a goddess-style peach dress. Her sister-in-law, Lara Trump, glittered in a silver beaded confection, while half sister and matron-of-honor Ivanka Trump looked like a fairy tale in an asymmetrical Cinderella gown. There was just one problem with the image from Tiffany’s Saturday wedding to 25-year-old Lebanese businessman Michael Boulos — but it was cropped out.

Standing next to Ivanka was her brother’s fiancée, Kimberly Guilfoyle, who seemingly did not get the pastel memo. The 53-year-old, who is engaged to Donald Trump Jr., wore a black frock with oversized puff sleeves and a high-low hemline that looked more “Maleficent” evil stepsister than Mar-a-Lago fairy tale.

But then Ana Navarro had to insult the wedding itself, mocking what was hopefully a nice day for Tiffany and trying to ruin it, saying:

“Maybe it’s completely the opposite. Maybe she did get the assignment because it was a MAGA funeral.”

The jokes about Guilfoyle were fine. The dress was weird and she’s a public figure. But Tiffany Trump isn’t; it was in poor taste for Navarro to attack it and mock Tiffany’s wedding, which should have just been a nice day for her and her family.” 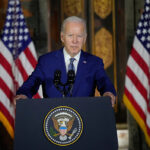